Numerous changes in body posture and musculoskeletal disorders occur during pregnancy – most commonly involving bodily statics in the pelvic and spinal areas – due to horizontal positioning of the sacrum and increased lordosis in the lumbar area (Majchrzycki et al. 2015).

Pregnancy causes overload of intervertebral discs at the level of L4/L5 and L5/ S1 is observed, as well as vertebrae rotation and muscle contracture causing tension of the ligaments (Majchrzycki et al. 2015). 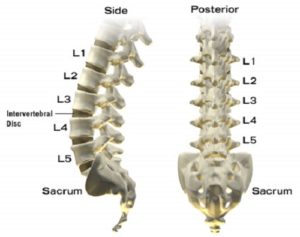 Other causes include loss of stabilization in the spinal muscles in the lumbar area, increased load on facet joints, and loosening of ligaments in the sacroiliac joint and pubic symphysis (Majchrzycki et al. 2015). 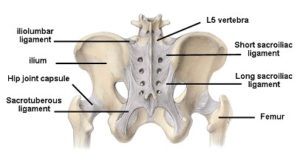 How does the body adapt to these changes during pregnancy? 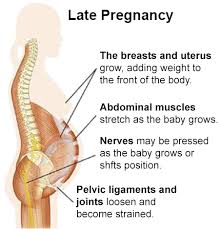 Summary of the Changes

In the group of women with chronic spinal pain, around 10% report the pain to have appeared during the pregnancy, most commonly between the fourth and the eighth month (Majchrzycki et al. 2015).

Most women consider the discomfort caused by the back pain to be an integral element of pregnancy, and fail to seek medical help. Only about 50% of the women, usually those with high pain intensity measured with the visual analogue scale (VAS), consult a doctor. Out of that group, approximately 70% are treated, in most cases with the use of different methods of therapy (Majchrzycki et al. 2015).

Pelvic Girdle Pain (PGP) is typically experienced in the vicinity of the sacroiliac joints. The underlying etiology of pregnancy related low  back pain and pelvic girdle pain is not fully understood. Current theories suggest that the symptoms may be related to changes in posture during pregnancy (increased lumbar lordosis), and increases in weight and instability of the pelvic girdle due to hormonal changes. It is estimated that more than two-thirds of pregnant women experience LBP, whereas, 20% suffer from PGP (Hall et al. 2016).

Low back pain (LBP) is encountered in an estimated 70% of pregnant patients but challenges persist in identifying safe, effective treatment options. For example, most pain medications are not recommended during pregnancy, leaving few options for pain control (Hensel et al. 2015).

Osteopathic manipulative treatment (OMT) is a body-based treatment that offers a conservative, non-invasive option for relieving pregnancy-related LBP while increasing back-related function. Osteopathic manipulative treatment is defined as “the therapeutic application of manually guided forces by an osteopathic physician to improve physiologic function and/or support homeostasis that has been altered by somatic dysfunction” (Hensel et al. 2015).

Manual therapy (hands-on treatment) to the muscles and joints by a osteopath, who specialises in pelvic girdle pain in pregnancy. They will give you hands-on treatment to gently mobilise or move the joints to get them back into position, and help them move normally again. This should not be painful (RCOG, 2015).

Osteopathic manipulative treatment is a form of therapy based on the use of relevant manual techniques to reduce tension in the myofascial structures, joints and ligaments. It is one of therapies treating lumbosacral spine pain in pregnant women and it occupies a special place among manual procedures. OMT can be used in severe lumbosacral spine pain (Majchrzycki et al. 2015).

Is Osteopathic Treatment Effective During Pregnancy?

What Trimester Does Back Pain Usually Appear?

Back pain ailments usually appear in the third trimester of pregnancy as a result of thoracic kyphosis, lumbar lordosis and pelvic tilt. It is suggested that in case of lumbosacral pain in pregnant women, muscle energy techniques can be used to relax the joints. All of the above mentioned techniques are safe to be applied in pregnant women at any stage of pregnancy (Majchrzycki et al. 2015).

The Pregnancy Research in Osteopathic Manipulation Optimizing Treatment Effects (PROMOTE) study was designed to evaluate the efficacy of a nine-week regiment of OMT to reduce LBP during the third trimester  (Hensel et al. 2015).

The primary objective was to evaluate the influence of OMT on self-reported pain and back-related functioning (Hensel et al. 2015).

A secondary objective was to corroborate an earlier study that found a relationship between receiving OMT during the third trimester and a decrease in meconium-stained amniotic fluid. We chose to examine this relationship based on a supposition that reducing maternal stress caused by pain may reduce meconium-staining, a potential objective measure of fetal stress (Hensel et al. 2015).

Results of the PROMOTE Study

The treatment goals for LBP in pregnancy differ from other conditions in that it may not be reasonable to expect to eliminate pain and disability, but instead to slow the progression related to advancing pregnancy. In PROMOTE, both OMT and Placebo Ultrasound treatment (PUT) demonstrated significant mitigating effects on pain and functional disability compared to Obstetric Care only (UCO) (Hensel et al. 2015).

Therefore, the inclusion of body-based therapies such as OMT that provide touch, time and interaction may offer patients and providers a safe, effective adjunctive option to improve comfort and reduce the impact of pain commonly associated with third trimester pregnancy (Hensel et al. 2015).

Manual therapy procedures appear to be effective and safe for pelvic and spinal pain management in the lumbosacral area in pregnant women and women in reproductive age. OMT use for back pain in pregnancy can eliminate or signifcantly reduce the need for pharmaceutical drugs which, especially when used in the first and second trimester, can result in adverse fetal effects (Majchrzycki et al. 2015).

When is the most appropriate time to combine Osteopathic Manipulative Treatment with Obstetric Care?

A study by Licciardone et al. (2010) demonstrated the feasibility of providing OMT as a complement to conventional obstetrical care during the third trimester of pregnancy.

The Safety of Osteopathic Manipulative Treatment

Osteopathic manipulative treatment (OMT) during the third trimester of pregnancy as applied in the PROMOTE study is safe with regard to labour and delivery outcomes. Though, the increased duration in labour in the OMT group needs further study (Hensel et al. 2016).

Impact of Massage during Labour

What the Osteopath should be aware of?

In the application of osteopathic techniques, osteopath will evaluate your level of pain as a factor for whether treatment is safe during pregnancy. As it has been shown that mothers who experience high levels of pain during pregnancy may be at increased risk of complications during labour. Whether the relationship has a physiological, mechanical or psychological cause, raising awareness of how pain at this time may affect women‘s birth experiences (Brown and Johnston, 2013).

There is currently limited evidence to support the use of manual therapies including massage and osteopathic manipulative treatment as an option for managing low back pain and Pelvic girdle pain during pregnancy. Current research is associated with a risk of publication and methodological biases, and lack of robust control comparisons. Further high-quality research is needed to determine causal effects, the influence of the therapist (Hall et al. 2016).

Brown A, Johnston R (2013). Maternal experience of musculoskeletal pain during pregnancy and birth outcomes: significance of lower back and pelvic pain. Midwifery. Dec;29(12):1346-51.