Many people also have symptoms such as nausea, vomiting and increased sensitivity to light or sound.
Migraines affect around one in every five women and around one in every 15 men. They usually begin in early adulthood.
There are several types of migraine, including:
•  with aura – where there are specific warning signs just before the migraine begins, such as seeing flashing lights
• without aura – the most common type, where the migraines occurs without the specific warning signs
• aura without headache, also known as silent migraines – where an aura or other migraine symptoms are experienced, but a headache doesn’t develop
Some people have migraines frequently, up to several times a week or occasionally. It’s possible for years to pass between migraine attacks.

Stages and Symptoms of Migraine 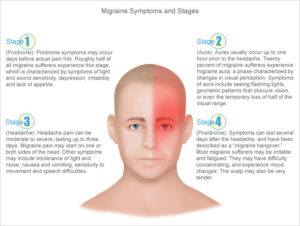 The Osteopathic Treatment of Migraines

With migraines the pain originates around the pericranial, neck and/or shoulder muscles may be referred to the head and experienced as a headache. In their comprehensive text, they described referred pain patterns emanating from different myofascial trigger points (MTrPs) in the head and neck muscles which might potentially contribute to certain head and neck symptoms found in migraine sufferers. MTrPs have been defined as highly localized and hyperirritable points situated in a palpable taut band of skeletal muscle fibers. When compressed or stretched, MTrPs may elicit local and/or referred pain or local twitch response (Tali et al. 2014).

Migraine and tension-type headache often coexist in the same patient. Previously the diagnosis “combination headache” has been used, but it has never been defined.

A study by Noudeh et al. (2012) found that cervical spinal manipulation and upper thoracic spine massage could significantly reduce the headache pain intensity in acute migraine attacks. As the prevalence of MTrPs in neck muscles are associated with migraines (Tali et al. 2014). Therefore massage treatment would be the preferred option by the osteopath to treat any mechanical/ musculoskeletela aspects of the migraine

Comparing the effects of Manual Therapy and Medication

In a systematic review by Chaibi et al. (2011), they concluded that massage therapy, physiotherapy, relaxation and spinal manipulative therapy might be equally efficient as propranolol and topiramate in the prophylactic management of migraine because some migraineurs do not tolerate medication because of AEs or co-morbid disorders,cervical spine manipulative therapy might be considered in situations where other therapeutic options are ineﬀective or poorly tolerated.

Though a manual therapy approach would only be suitable if the migraine is caused by musculoskeletal presentation.

OMT has a positive effect on pain reduction and quality of life improvement in patients with migraines without aura (Adragna et al. 2015).

How many many appointments will I need to reduce pain and improve my mood associated with migraines?

Osteopathic treatment is tailor the individual, so it based on what that person needs. However it has been shown that  patients with high-frequency migraine and comorbid mood disorders showed significant improvement after four 45-minute osteopathic manipulative treatment (OMT) sessions (D’Ippolito et al. 2017).

Though further investigation into the effects of OMTh on pain and mood disorders in patients with high-frequency migraine is needed (D’Ippolito et al. 2017).