The frozen shoulder is a multifactorial disease characterized by inflammatory adhesion and stiffness of the glenohumeral capsule, pain in the shoulder, and limitation of movements in all directions (especially abduction, external rotation, and posterior extension). The age of onset falls between 30 and 70 years, with an average of fifty. More females are affected than males, with the left shoulder more often involved than the right (Cui et al. 2017). 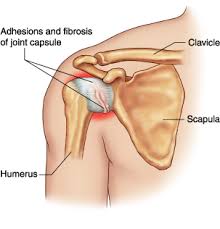 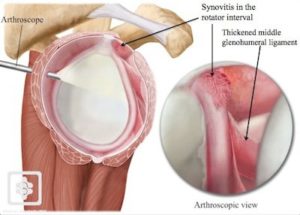 Both manual mobilization therapy along with general exercises and exercises alone brought improvements in outcome measure scales for pain, glenohumeral ranges and shoulder pain and disability index but none of intervention is significantly effective over one another in 5 weeks of treatment (Ali and Khan, 2015).

There is a wide variety of manual therapy techniques that can be applied to treat frozen shoulder.

A case report suggests that Angular Joint Mobilization , which is rotational joint mobilization with joint axis shift, may be an effective intervention for improving shoulder pain, ROM, and disability in individuals with adhesive capsulitis (Kim and Lee , 2017).

Mobilization with Distension For Frozen Shoulder

Also hydraulic distension plus manual therapy decreased shoulder pain and improved shoulder function. Specifically, pain, satisfaction, and range of motion showed quick improvement from 6 weeks to 12 weeks after treatment. The treatment results of this study can be used for frozen shoulders (Kwak and Kim, 2016).

Mobilization with Distension combined with Steriod Injections for Frozen Shoulder

Whereas another study suggested that the most effective treatment for subacute Adhesive encapsulitis is a combination of intensive mobilization and steroid injection with capsular distension, and helped to control inflammation, extend joint space, and recover ROM. Therefore, intensive mobilization should be conducted by a skilled physical therapist after steroid injection with capsular distension to optimize the treatment effect for patients with Adhesive Encapsulitis (Park et al. 2014).

Osteopaths use hydraulic distention when applying an articulatory technique to the shoulder known as the Spencer Technique  to help relieve restriction and pain at the shoulder. Although variations exist, normally 7 steps are included. Indications for the Spencer technique include adhesive capsulitis.

The following is a common sequence (of the 7 stages of the technique: 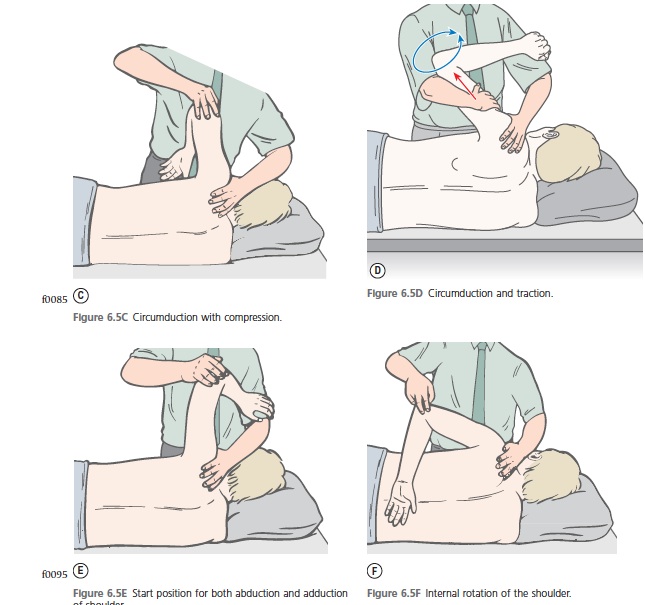 A pilot study suggested that the Spencer technique is an effective treatment modality for improving the functional ability of the shoulder in the elderly (Knebl et al. 2002).

The Niel-Asher technique (NAT) involves a deliberate, specific algorithm of manipulations to the muscular and ligamentous apparatus of the glenohumeral
joint based around a five-step treatment protocol. Treatment sessions last between 25 and 40 (average of 30) minutes in duration; the technique was performed on all patients in sequential order on each visit. Within the five steps of the NAT protocol there are two main types of techniques employed which have been slightly modified; deep stroking massage (step one) and compression of trigger points (steps two, four and five) (Niel-Asher et al. 2014).

The notion of a “one-technique-fits-all” technique may initially seem an anathema to the “treat the individual” model that osteopathy currently promotes.
Whilst the idea may be challenging to some, the results of NAT are fast, effective and reproducible (Niel-Asher et al. 2014).

This technique involves locating the tender point that when compressed triggers a specific referred pain pattern (preferably reproducing the patient’s symptoms)and applying a direct pressure to this point:

Technique
1. Identify the tender/trigger point you wish to work on
2. Place the patient in a comfortable position,where the tissue which contains the tender/trigger point can undergo full excursion if required;
3. Apply gentle, gradually increasing pressure to the tender point until you feel resistance;
4. This should be experienced by the patient as therapeutic discomfort but in this technique it may sometimes border on pain;
5. Apply sustained pressure until you feel the tender point yield and soften. This can take from seconds to several minutes;
6. This can be repeated, gradually increasing the pressure on the tender/trigger point until it has fully yielded.
7. To achieve a better result, you can try to change the direction of pressure during these repetitions.

Technique
1. Place the patient in a comfortable position, where the affected/host muscle can undergo full excursion;
2. Lubricate the skin if required (the lead author uses simple BLUE NIVEA);
3. Identify and locate the tender/trigger point or taut band;
4. Perform slow stroking massage using your thumb/applicator just beneath the taut band, and reinforce with your other hand if required;
5. This should be experienced by the patient as therapeutic discomfort but in this technique it may sometimes border on pain;
6. Sustained pressure is applied until the tender/ trigger point softens, followed by continued stroking in the same direction towards the attachment of the taut band;

Cochrane Review of Manual Therapy and exercise for Frozen Shoulder

The best available data show that a combination of manual therapy and exercise may not be as effective as glucocorticoid injection in the short-term. It is unclear whether a combination of manual therapy, exercise and electrotherapy is an effective adjunct to glucocorticoid injection or oral NSAID. Following arthrographic joint distension with glucocorticoid and saline, manual therapy and exercise may confer effects similar to those of sham ultrasound in terms of overall pain, function and quality of life, but may provide greater patient-reported treatment success and active range of motion (Page et al. 2014)

Ali SA, Khan M (2015). Comparison for efficacy of general exercises with and without mobilization therapy for the management of adhesive capsulitis of shoulder – An interventional study. Pak J Med Sci.  Nov-Dec;31(6):1372-6